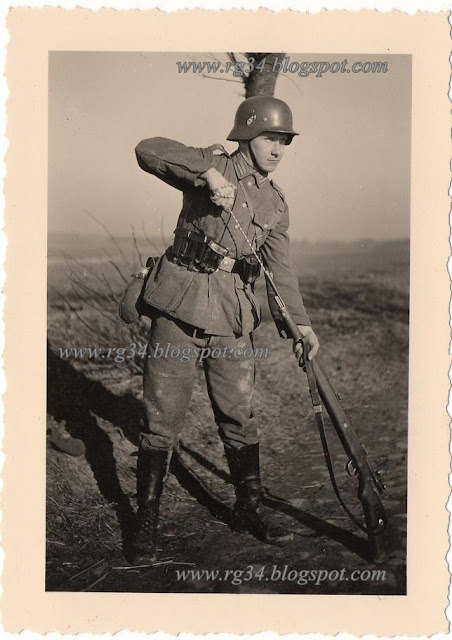 The Reinigungskette or cleaning chain was comprised of a rotating head patch loop and a pull though chain made of S-shaped steel links covered (at first) with aluminium barrells. The chain was aprox.107 cm long and had normally 65 links (+/- 2). It was used equally on all type of weapons and oficially never was introduced a short version of it for to use on pistols or Mpi's.

The cleaning chain was made with a high quality and represented the 40 % of the total manufacture cost of a complete Rg 34. With the war going and the necessity to increase production several changes and simplifications in the chain were introduced. One of the first changes has to do with the material of the barrels which covered the links. Aluminum, that was a strategic material, was substituted by a zinc alloy and then later by steel. Also the sturdy patch loop was replaced by a simplified patch loop made from a simple folded wire. Another significant change at late stage of the war was the use of another pull through chain type made from twisted wire uncoated refered by collectors as "Kriegsmodell" chain type. These and other modifications were introduced gradually by the manufacturers althought not all changes were adopted by all makers and each producer had its own peculiarities, resulting in the existence of a lot of variants.

The cleaning chains were normally stamped by the maker on the base patch loop, at first with the firm's name and often also with the year of manufacture, and from 1940/41 with the code asigned to the maker. This stamping was omited progressively and in the last years of production in general do not show any stamp. Also up to around 1942 generally a Waffenamt stamp was present indicating Military acceptance of the chain.

At first the cleaning chains were manufactured by the maker of the complete kit but with the increase of the production some manufacturers incorporated subcontracted made chains in their kits. I suspect also that at some point a large manufacturer might provide some cleaning chains to other firms.
Known subcontractors of the cleaning chain were:
A remark must be made with regard to the latest company mentioned and the chains marked with code "hlv". This code correspond to Maury & Co (Offenbach), that  manufactured basically pistols holsters, leather pouches, helmet liners and similar hardware. In my opinion maybe this code is realy "hly" instead of "hlv", perhaps due to a wrong marking process or a defective stamping die. The "hly" code correspond to Kraft & Schüll (Düren) that was a well know manufacturer of wires and chains, machines, metal hardware,...