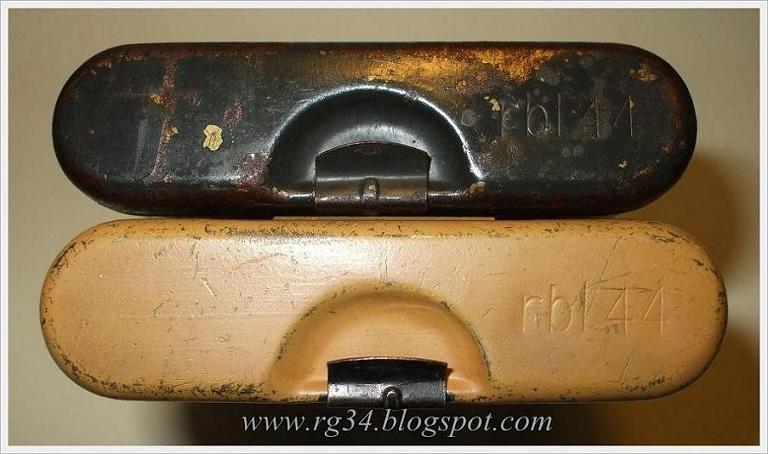 The "rbl 44" marked kits are an unknown chapter of the Rg34  manufacture history. Today, it is not known the manufacturer firm that corresponds to this code. The "rbl" code has been observed only on Rg 34 kits marked with the year 44, wich assumes that only were manufactured in that year.

Considering that the "oaa"-"ozz"  letter codes sequence - the last one known - were issued in October 1944, the code "rbl" must have appeared towards the very end of 1944.

With regard to the possibility that the apparition of this code was just a late war code change of some manufacturer, like the change from "arr" to "rco" code in the Braunschweigische Blechwarenfabrik kits, the observed kits don't show significant similarities with the other manufacturers, so these kits could come - at least the case - simply from a new unknown producer. It hasn't been observed any Waffenamt on the few "rbl" observed kits, something normal at this late stage of the manufacture.

The "rbl" kits were manufactured without the reinforcing lateral ribs, and generally show a characteristic coppery colour coating on the "Behalter", sometimes visible also on the exterior of the case when the paint came off. Too, normally these kits have all the pins soldered to the case, something only seen also at this late-war stage, in the G. Appel kits.